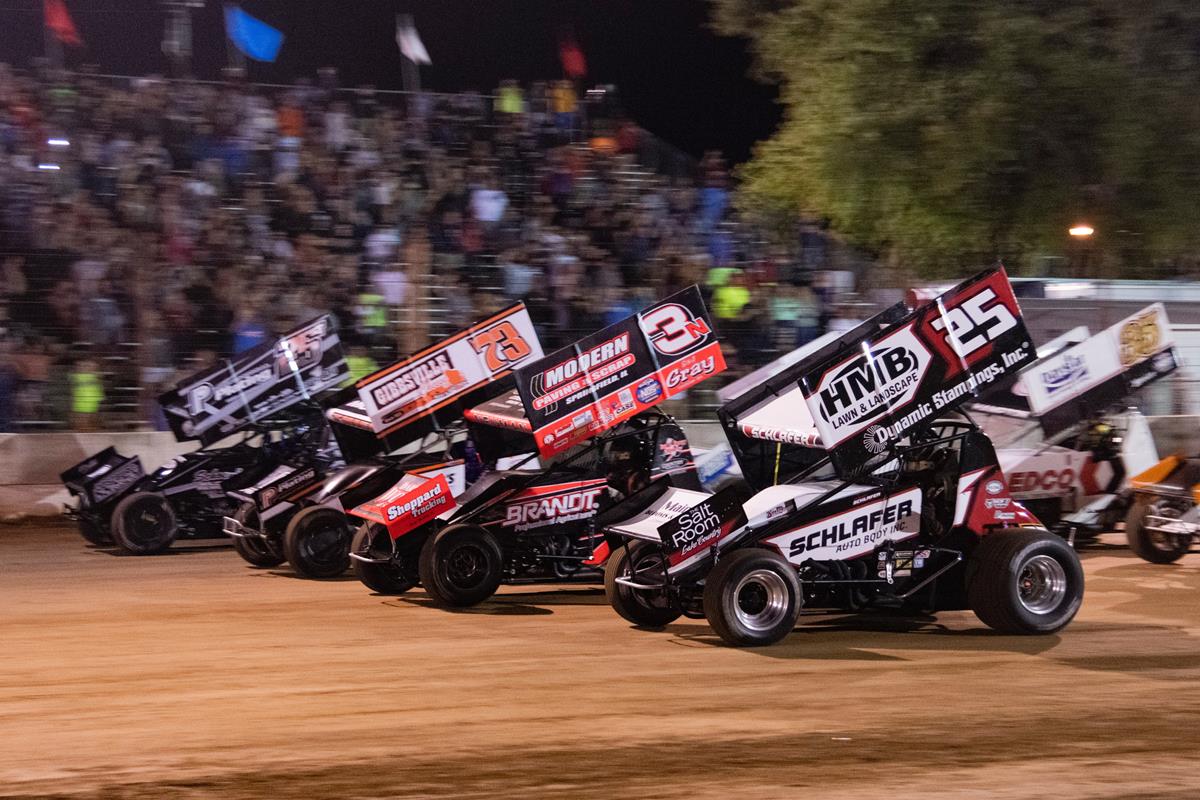 The Bumper to Bumper IRA Sprints returned to the “Horsepower Half-mile” for the first time since 2020 for the Harry Neitzel Tribute race. 23 IRA Sprint Cars signed in to grip and rip at the Dodge County Fairgrounds. Picking up where he left off from 2020, “The Big Wheel” Scotty Thiel laid down the time to beat at 16.964.

When we dropped the green on the feature, it was Schlafer who led. Schlafer powered himself around the top side of Dodge, giving himself a commanding lead from the competition. Arenz, Thiel and Neuman were stuck battling behind him. Thiel worked his way around Neuman and Arenz and began hunting down Schlafer on the backstretch. Thiel stalked his prey and would take the lead 11 laps in of 25 in turn three. Thirteen to go as Neuman, Arenz, and Blackhurst would battle for position when Schlafer would retire into the infield of turn one causing the yellow to fly. The 25 would return to competition. Thiel would lead the field to the green and ditch the rear view mirror and run away from competition. We would throw caution once more for the 35 of Zach Hampton with problems. We would restart the field when Arenz and Schlafer had problems. Tough end for the 25T and 25 teams. The five remaining laps would count down for the Big Wheel as the checkered would drop at the Dodge County Fairgrounds. Jake Blackhurst would hang on to second, Neuman third.

After this race, Rookie of the year contender Jake Neuman would lead the IRA Sprints points heading into Plymouth.

The Series within a Series of the Hopf Farms Bullring Showdown continued at the Plymouth Dirt Track for night number four. The sounds and lights of the fair and the buzz of the fans filled the dirt track. 31 cars signed in to battle under the glow of the fair lights.

Schuett and Thiel would lead the field to the green. Thiel, Hampton, and Schuett would battle close by for three laps until Neuman drew out a red flag in turn two. Neuman was able to walk away from the wreck. We went back to green with three laps in and Thiel would jump back out to the lead. We would almost complete a full circuit around the dirt track when the right rear tire of the 4K would fly off. We went back to green and once again Thiel would grab the lead with Hampton in striking distance. Hampton would try to grab the lead from Thiel on the restarts in turns one and two, but the Big Wheel would grab the lead back in three and four. Red flag would wave for Austin Hartmann in turn one. Hartmann would also be able to walk away from the scene. While the safety crew and track crew worked to repair the track and incident in turn one, we went under an open red. Teams made adjustments to their cars and we went back to green with 22 out of 30 laps in. Thiel would lead the field to the green again and Hampton once more would dive to try to take the lead in one and two, but would be challenged and passed by the 73 in turns three and four. Meyer would use his momentum to be able to pass Hampton on the front stretch with three to go. Meyer began hunting down Thiel and got his nose under the 73 but was unsuccessful. White flag would wave, then the checkered for the second time this weekend for the Big Wheel Scotty Thiel. Meyer would finish second, and Hampton third.

The points shook up AGAIN after this, Jake Blackhurst would regain the points lead followed by Jordan Goldesberry and Jake Neuman (R) would round out the top three in points.

To see a full list of the 2022 points battle: www.irasprints.com/standings