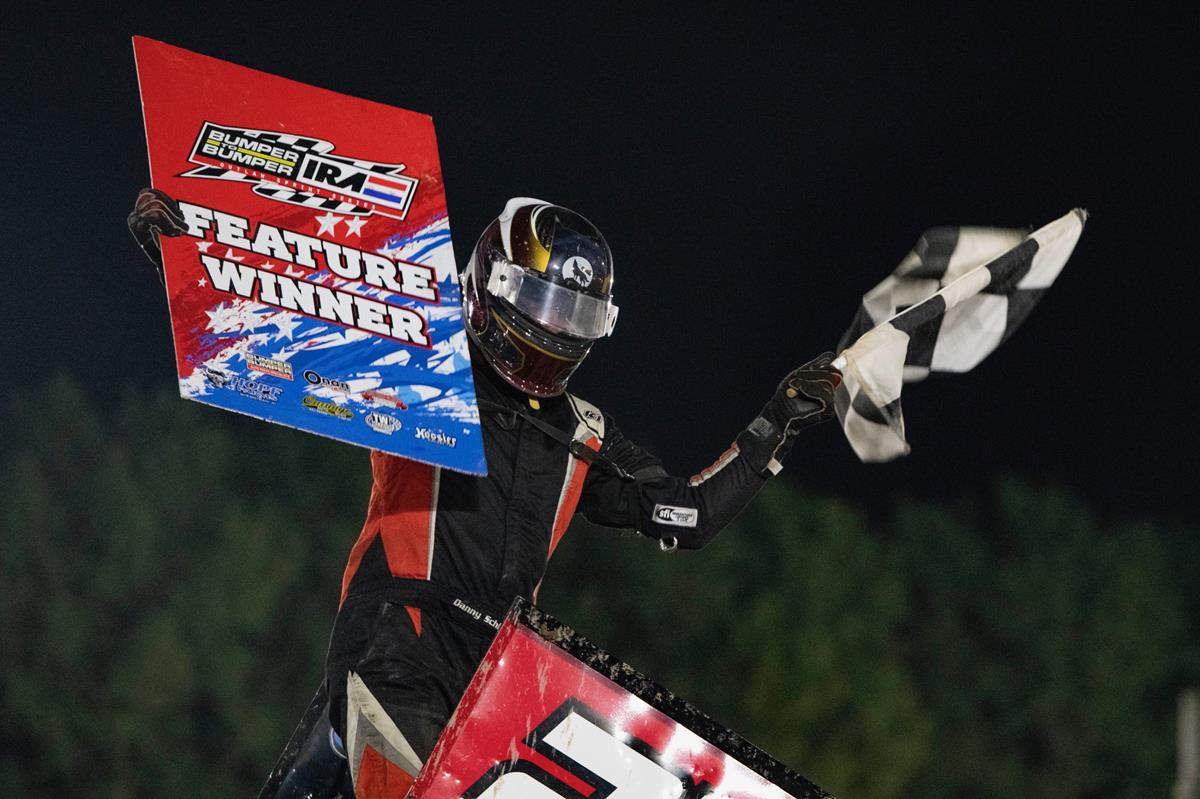 It was Founder’s Night at Wilmot Raceway and on top of that, Wilmot would crown a 2022 Sprint Car Track Champion. 27 Bumper to Bumper IRA Sprint Cars checked in at the raceway for the night. Setting fast time of the night was the Rhine Auto 39 of Jake Blackhurst. Heat race winners would be Scotty Neitzel, Austin Hartmann, and Danny Schlafer. We saw plenty of new and rookie faces during the draw for the dash. One particularly was Scott Conger who qualified 4th fastest overall with his 360 motor yet under the hood. Ion Stear and Danny Schlafer would win the dashes of the night.

Schlafer and Stear would lead the field to green at “Showtime'' with Stear riding the low line and Schlafer and Nimee rising to the top. On the opening lap, there was a scary moment for the Iron Man of Scotty Neitzel in turn three. He was looked over and was sore, but okay. We threw the green again on Schlafer and Stear once more led the field to the green. Schlafer rockets around and takes lap one as the leader as Stear and Nimee follow behind him. Arenz would follow behind as fourth and Blackhurst 5th. Arenz would try to slide under Nimee for a chance at third but came short. Schlafer, on the move, would catch up to the tail of the field. With seven laps in, Stear would lose second to Nimee when they crossed the flagstand. That time around, we would throw the caution on Austin Hartmann spun around in turn two and port a potty problem with Ion Stear in the infield. Schlafer would take the field back to green as Nimee and Arenz would follow behind. We would do a circuit around Wilmot Raceway until Nick Alden would spin in the 10v. When we went back to green, it was the 25, 79, 25T, 39, and 5j. On the backstretch with 14 to go, Blackhurst would wrestle Arenz for third. Schultz would also throw himself into the mix for third when he and Blackhurst would spin in turns 3 and 4. Back on the loud pedal, Schalfer would continue to lead the way around Wilmot. The battle would continue behind the 25 between Arenz and Nimee. 10 to go as Schalfer would cross the flagstand, Nimee second, Arenz third, Neuman fourth, then Goldesberry. Laps would continue to count down, and Neuman would challenge Arenz and Nimee for a podium finish. Schlafer would have 5 laps left with numerous lap cars behind him and the rest of the podium contenders. Nimee and Arenz would go side by side at the line with 4 to go and pass for second with two remaining. White flag would drop for Schlafer followed by Arenz and Nimee. Neuman would finish fourth and Goldesberry would round out the top five.

Schlafer’s win at Founder’s Night would be his 3rd feature win of the season, and add another notch to the record books making the Schlafer Father-Son Duo win at Wilmot Raceway in 360 and 410 competition.

The points battle would continue to shake up, as Schlafer would take the points lead. Neuman would take second (-11 pts) and Blackhurst third (-34 pts). The Bumper to Bumper IRA Sprints head into a triple header weekend at the Dodge County Fairgrounds on Friday for the Harry Neitzel Tribute, Saturday at the Plymouth Dirt Track for the Sheboygan County Fair, and Sunday for Sunday Funday.

Watch the action LIVE on FloRacing if you can’t make it!