Neuman Rounds out Rookie Season with a Win

On a somewhat chilly championship night, the a-mainapparel.com championship night’s action was heating up. We had a total of 97 open wheel cars checked into the Plymouth Dirt Track. 24 Bumper to Bumper IRA Sprints, 32 Autometer Wisconsin Wingless Sprints, 17 Lightning Sprints, and 24 MSA Sprints.

Picking up the extra $150 from www.lakehomeretreats.com for the second time this weekend was Port Royal’s Dylan Cisney. Remember, we all need a vacation now that the race season is over for us, book your vacation with John and Lake Home Retreats!

Our two dash winners that set up the front row of our feature were Josh Schneiderman and Jake Neuman.

On the final “It’s showtime” of the season, the race looked similar to a race previous in the season for Neuman. Neuman was determined not to repeat what happened that night after leading the majority of the race, and would come home second. Neuman jumped to the early lead on the high side followed by Schneiderman and Bosie. Bosie would be challenged by the Lone Wolf of Schlafer and would be passed for third. The double dozen would quickly make 5 laps in as Jake Neuman would continue to lead the way. Neuman met up with lap traffic and began weaving through it with 8 laps in. Schneiderman would continue to follow behind the 3n along with the 25 of Schlafer. Dodge County Fairground’s victor, Dylan Cisney, would be the next to challenge Schlafer. 13 in to go, 17 remained as Jake Neuman would continue to dance his way around traffic when the 4 of Jordan Paulsen would be parked in turn 2 at the halfway mark.

At the chalk line, it was Neuman, Schneiderman, Schlafer, Cisney, and Bosie up front. Neuman jumped to the high side as Josh Schneiderman would peak his nose under the 3N. As the laps ticked down, the “Big Wheel” Scotty Thiel broke into the top 5. Neuman would hit traffic again as a dozen would remain. Cisney and Thiel would exchange spots for 4th and 5th. Neuman would take us down to 5 to go as he strategically weaved his way through traffic. Schneiderman still second and Schlafer still third. White flag would wave for the 3N and the 49 was on his tail. Out of turns 3 and 4, Neuman would hang onto it for his first career IRA Sprint win, Schneiderman second, and Schlafer third.

Neuman would round out his Rookie Tour with the Bumper to Bumper IRA Sprints with a win and grabbing the Sage Fruit Hepfner Racing Products Rookie of the Year honors.

With our 2022 season concluded, your 2022 Bumper to Bumper IRA Sprint Champion is Rockstar Energy Drink’s Jordan Goldesberry. Sussex, WI native Danny Schlafer would place second, and Jake Blackhurst third. Scotty Neitzel and Jake Neuman would round out the top 5.

Your 2022 AutoMeter Wisconsin Wingless champion ended in a history-making tie between Tim Cox and Clayton Rossman, and your IRA Lightning Sprint Champion is Mike Neau.

From everyone with the IRA Sprint Car Series, congratulations to all of our racers on a phenomenal year. Thank you fans for coming out to tracks and to those who watched on FloRacing. Watch the website and social media during the off season for all updates and articles. 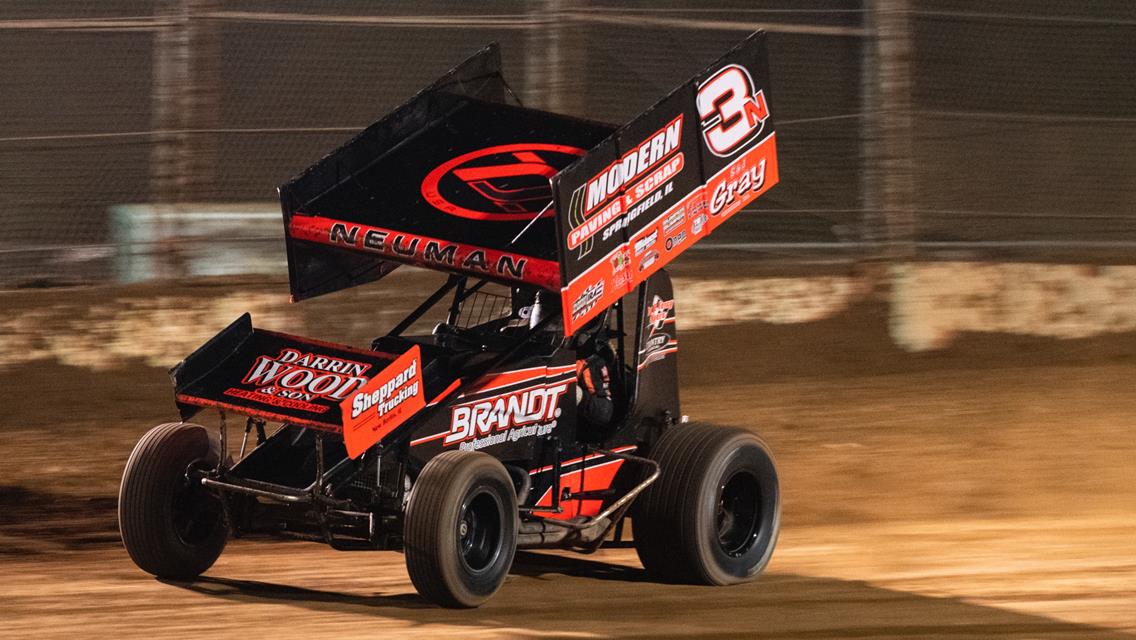